Long before they became a billionaire power couple, Mark and Robyn Jones would spend their summers as children growing up in Alberta, Canada across the border in Whitefish, Montana. Mark’s family would regularly go camping in Lake Blaine; Robyn’s preferred to hit the slopes. Now, the husband-and-wife duo behind insurance firm Goosehead are paying those memories forward by announcing a $101 million gift to Montana State University, with the goal to train hundreds of much-needed nurses each year and expand access to healthcare in the state’s rural areas.

The donation, which will be paid out over nine years and was announced on Monday, is tied to specific goals aiming to train more nurses, midwives and nurse practitioners who can provide healthcare in underserved areas across Montana, particularly the state’s numerous Native American reservations. The gift is also the largest to a nursing school in the U.S., narrowly surpassing the $100 million donation by fellow billionaire and Intel cofounder Gordon Moore to the Betty Irene Moore School of Nursing at the University of California, Davis in 2007.

According to MSU College of Nursing Dean Sarah Shannon, the gift will increase the number of nurses who graduate from the school’s program by 56% to 400 a year—a rate that’s projected to plug the state’s shortfall by 2030. It will also more than double the ranks of family and psychiatric nurse practitioners, who can act as primary care providers in communities that lack access to doctors.

“We look at it in a very real sense as an investment, and we’re always interested in ways that we can make a difference,” Mark Jones told Forbes in late August. “We love the people [in Montana] and it just made us feel right at home. It makes you want to help.”

The couple first became interested in supporting the healthcare system in Montana after their friend and the superintendent on their home building project, David Haney, died of cancer earlier this year. As they worked with Montana State University’s medical school to establish a scholarship in Haney’s name, which will be awarded each year to one student with the hopes they can go on to discover a cure for cancer, the couple learned about the depth of the health disparities in Montana.

“The healthcare challenges in the state of Montana are profound. People are suffering needlessly,” says Mark. “If you cut through all the fog, it becomes clear that this is a capacity issue. There are many counties that lack even one primary mental health or maternal care provider.”

Montana has faced a chronic shortage of nurses for years, despite receiving $700,000 from the federal government to address the shortage in 2018. Native Americans—who make up nearly 7% of the state’s 1.1 million population—face higher mortality rates than other residents, while nearly a quarter of women in the state did not receive adequate prenatal care in 2020, according to data from the United Health Foundation, a nonprofit run by healthcare giant UnitedHealth Group.

“Mental health, primary care and maternal health services are in short supply in Montana,” says Montana State University’s Shannon. “Nurse practitioners have been found to be significantly more likely than physicians to work in rural areas and MSU sees them as a very important tool to address the state’s health care needs.”

For Mark and Robyn Jones, partnering with MSU’s nursing school presents the best return on investment for them and for closing the state’s healthcare gaps. Part of the gift will establish the state’s first nurse midwifery program, as well as endowing five new professorships and new facilities at each of MSU’s five campuses across the state. A centerpiece of the donation is a scholarship fund to keep tuition costs affordable, with the aim of training more nurses who will return to work in their own communities, particularly in Native American reservations.

“They’re recruiting bright young people, they’re educating them and then those people are serving in their local communities,” says Mark. “We’re excited to support them.” 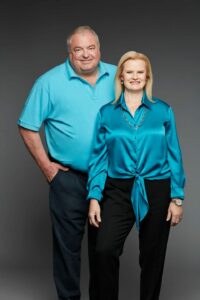