The Bill and Melinda Gates Foundation announced a new $1.2 billion commitment to support efforts aiming to eradicate polio across the world. The financial commitment will support the Global Polio Eradication Initiative (GPEI) Strategy 2022-2026 to end the virus in Pakistan and Afghanistan, the final two endemic countries, as well as to stop and prevent new variant outbreaks of the virus.

The GPEI is a public-private partnership led by a series of national governments including the Gates Foundation, Rotary International, the World Health Organization (WHO), and the US Centers for Disease Control and Prevention. This commitment toward GPEI marks nearly $5 billion in total contributions from the Bill & Melinda Gates Foundation.

The strategy requires a total of $4.8 billion in funding to reach its goal of eradicating the disease in Pakistan and Afghanistan, providing polio vaccines and other essential health services to 370 million children yearly, as well as strengthening health systems in countries to better prepare for future threats.

Pakistan has reported 20 cases of polio so far, this year, which was a problem heightened by the challenges caused by unusual amounts of rain in 2022 that damaged roads, health facilities, lessened vaccination drives, and ousted communities.

Afghanistan has reported 2 cases of polio so far this year after the Taliban, who took over Afghanistan in the previous year, finally agreed to allow health workers from the United Nations to begin national campaigns. Prior to this, the Taliban banned all regions under its control to polio teams, causing many to lack access to polio vaccines.

While the disease stubbornly remains in the war-torn regions of Pakistan and Afghanistan, there have been dozens of outbreaks prompted by vaccines in Africa, Israel and the US in recent years. Pan American Health Organization (PAHO) said Brazil, the Dominican Republic, Haiti and Peru are all at a high risk for reintroduction of polio. And the state of New York is taking precautions to vaccinate residents after the virus was detected in wastewater samples, which were also detected in London and Jerusalem.

“Polio eradication is within reach. But as far as we have come, the disease remains a threat. Working together, the world can end this disease,” said Bill Gates, the co-chair of the Bill & Melinda Gates Foundation. “I want to thank Germany for co-hosting this week’s events and its longstanding support for polio eradication, and I urge other donors to support the eradication strategy to ensure no one is paralyzed by polio again.”

Polio is a highly infectious disease, spread predominantly through fecal matter, that can infect a person’s spinal cord and cause both paralysis and death. While there is no known cure, advancements in the polio vaccine have tremendously helped to reduce symptoms, block outbreaks, and eradicate the disease in various regions.

Albert Sabin, whose birth name was Abram Saperstejn, a Jewish refugee- a medical researcher who served as the President of the Weizmann Institute of Science in Israel, and later worked at the U.S. National Cancer Institute, and the National Institutes of Health discovered the oral polio vaccine (OPV) that played a critical role in eradicating the disease in the 1960’s.

Sabin’s studies led to the discovery that polio was an enteric virus that multiplied and attacked the intestines before moving to the central nervous system. This led to Sabin’s development of an oral vaccine that stimulated antibody production and prevented paralysis by blocking the disease from entering the bloodstream.

In 1960, the OPV was administered to 180,000 school children in Cincinnati for a mass immunization clinical trial where the disease was completely eradicated. From 1955 to 1961 OPV was also tested and proved effective on 100 million people in the USSR, regions of Eastern Europe, Singapore, Mexico, and the Netherlands.

Sabin’s oral vaccine replaced Jonas Salk’s vaccine that was developed in 1954 and was praised for its simpler administration methods and longer lasting effects. The OPV became the primary vaccine in the US, breaking chains of transmission and providing a glimmer of hope for a future where the virus might one day be completely eradicated.

That same hope has not parted from those still fighting polio today, as Bill Gates recently shared that the world came its closest to eradicating the polio virus just six months ago.

“The last steps to eradication are by far the toughest. But our foundation remains dedicated to a polio-free future, and we’re optimistic that we will see it soon,” said Mark Suzman, the CEO of the Bill & Melinda Gates Foundation.

There is great irony behind the just announced $1.2 billion effort to help those two particular countries. It is a little-known fact that both Pakistan and Afghanistan are predominantly Muslim countries with the combined population of 270 million who consistently refuse diplomatic relations with Israel- Professor Sabin’s beloved homeland.

Three decades ago, Lifestyles Magazine/Meaningful Influence was granted an exclusive event opportunity with Professor Sabin, where he explained his motivation to decline financially benefitting from his paradigm-changing oral vaccine.

He refused to patent his vaccine, waiving commercial exploitation by pharmaceutical industries, so that the low price would guarantee a more extensive spread of the treatment. From the development of his vaccine Sabin did not gain a penny and continued to live on his salary as a professor.

The Sabin Vaccine Institute was founded in 1993 to continue the work of developing and promoting vaccines. To commemorate Professor Sabin’s pioneering work, the institute annually awards the Albert B. Sabin Gold Medal in recognition of work in the field of vaccinology or a complementary field. 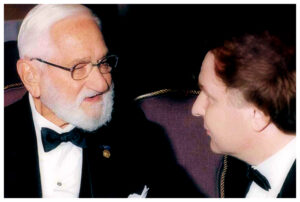