The new Rubenstein Commons building at the Institute for Advanced Study has opened its doors, providing a nexus of flexible gathering spaces to support enhanced communication and collaboration among scholars, and forming an inviting social hub for the wider IAS community.

Enabled through a visionary gift from businessman and philanthropist David M. Rubenstein, the Commons will have a transformative impact on intellectual and communal life at IAS, one of the world’s leading centers for curiosity-driven basic research.

The Institute for Advanced Study has served the world as one of the leading independent centers for theoretical research and intellectual inquiry since its establishment in 1930, advancing the frontiers of knowledge across the sciences and humanities. From the work of founding IAS faculty such as Albert Einstein and John von Neumann to that of the foremost thinkers of the present, the IAS is dedicated to enabling curiosity-driven exploration and fundamental discovery.

Each year, the Institute welcomes more than 200 of the world’s most promising post-doctoral researchers and scholars who are selected and mentored by a permanent Faculty, each of whom are preeminent leaders in their fields. Among present and past Faculty and Members there have been 35 Nobel Laureates, 44 of the 62 Fields Medalists, and 22 of the 25 Abel Prize Laureates, as well as many MacArthur Fellows and Wolf Prize winners.

“With the opening of this forum for curiosity, discovery, and critique, we celebrate the Institute’s enduring commitment to the nourishment of the global collective intellect,” stated David Nirenberg, IAS Director and Leon Levy Professor. “This is a place whose beauty will stimulate contemplation and whose space will invite the dialogue necessary for questioning at its most profound.”

Through its design, Rubenstein Commons will support community and academic life on the IAS campus by promoting communication and collaboration with a variety of social spaces and meeting rooms. Conceived as a “social condenser,” the building provides a communal and flexible gathering place for the Institute’s research community across all four Schools—Historical Studies, Mathematics, Natural Sciences, and Social Science. The Commons will also offer a space for the display of images and materials that tell the story of the Institute’s heritage and extraordinary scholarly community, from Einstein to today.

“By having the ability to come together, the great human brain can be improved because all brains, all humans benefit from talking to others,” remarked Rubenstein at the groundbreaking ceremony on March 14, 2018. “What the Commons is designed to do is to bring people together, who are the great brains of our society, and have them interact; and people who visit can meet with the scholars. So that’s really what it’s designed to do.”

Tasked with creating a new building with long-term architectural significance, the design by Steven Holl Architects—selected as the winner of an international competition in March 2016—integrates with the surrounding landscape and campus, including the Institute’s flagship building, Fuld Hall, designed by Jens Fredrick Larson in his characteristic Colonial Revival style.

“It has been an honor and a joy to work on such an extraordinarily important project for the Institute for Advanced Study,” said Steven Holl. “We only hope that the inspired feelings we had in creating and making these spaces can contribute to the future social life of the Institute.”

The building will be dedicated with a ribbon-cutting ceremony bringing together scholars, IAS Trustees, chief architectural and building partners, local officials, business leaders, foreign dignitaries, and dozens of members of the campus and local community. Details of the rescheduled ceremony will be forthcoming.

The Institute for Advanced Study has served the world as one of the leading independent centers for theoretical research and intellectual inquiry since its establishment in 1930, advancing the frontiers of knowledge across the sciences and humanities. From the work of founding IAS faculty such as Albert Einstein and John von Neumann to that of the foremost thinkers of the present, the IAS is dedicated to enabling curiosity-driven exploration and fundamental discovery.

Each year, the Institute welcomes more than 200 of the world’s most promising post-doctoral researchers and scholars who are selected and mentored by a permanent Faculty, each of whom are preeminent leaders in their fields. Among present and past Faculty and Members there have been 35 Nobel Laureates, 44 of the 62 Fields Medalists, and 22 of the 25 Abel Prize Laureates, as well as many MacArthur Fellows and Wolf Prize winners.

Carlyle Group co-founder David M. Rubenstein has been heralded for what he calls his “patriotic philanthropy” — gifts totaling more than $100 million to support federal monuments, historic sites and national treasures such as the Kennedy Center and the Smithsonian Institution.

Rubenstein was among the initial 40 individuals who have pledged to donate more than half of their wealth to philanthropic causes or charities as part of The Giving Pledge.

He has purchased rare so-called Stone copies of the Declaration of Independence, the Emancipation Proclamation, the 13th Amendment, the Abel Buell map, the Bay Psalm Book, and the Constitution and has lent these documents to the State Department, the National Archives, the National Constitution Center, the Smithsonian and Mount Vernon.

In December 2011, Rubenstein donated $4.5 million to the National Zoo for its giant panda reproduction program. The panda complex was then named the David M. Rubenstein Family Giant Panda Habitat for the next five years and conservation biologists in the U.S. and China who are awarded National Zoo fellowships for their work to save pandas would be named “David M. Rubenstein Fellows. “Another $4.5 million was donated in September 2015, about four weeks after a male giant panda cub was born.

In April 2013 and 2015, he donated a total of $20 million to the Thomas Jefferson Foundation, which was used to rebuild at least two buildings in the enslaved community on Mulberry Row at Monticello. The funds were also used to restore Jefferson’s original road scheme, restore the second and third stories of Jefferson’s home which were mostly empty, and replace infrastructure.

In November 2013, he bought a copy of the Bay Psalm Book for $14.1 million, the highest price ever paid for a printed book, and pledged to lend it to public collections and exhibitions around the world.

On February 15, 2016, Presidents’ Day, Rubenstein presented a gift of $18.5 million to the National Park Foundation to expand educational resources, foster public access, and repair and restore the Lincoln Memorial on the National Mall in Washington, DC. The Park Service plans to create 15,000 square feet of visitor space in the undercroft of the memorial. This gift, presented during the National Park Service’s centennial year, was Rubenstein’s fourth gift to benefit US national parks. On December 2, 2016, Rubenstein, in conjunction with the National Park Foundation, agreed to cover the cost of elevator upgrades to the Washington Monument. The monument reopened on September 19, 2019.

In 2016, he donated $25 million for a pancreatic cancer center at Memorial Sloan Kettering Cancer Center.

In October 2019, the National Park Foundation announced that David Rubenstein donated $10 million for upgrades to the Thomas Jefferson Memorial in Washington, D.C. The gift funds a new and expanded museum within the memorial that was expected to be completed in time for the memorial’s 80th anniversary in 2023.

In 2020, he donated $10 million to the Library of Congress for the refurbishment of its Jefferson Building.

Rubenstein has donated over $100 million to Duke University and served as chair of its board of trustees from 2013 to 2017.[60] Rubenstein’s first large gift to Duke was in 2002, when he donated $5 million to Duke’s Sanford School of Public Policy in 2002; that gift led to the naming of Rubenstein Hall. In 2009, he donated an additional $5.75 million to support Duke’s public policy program.

In 2013, Rubenstein donated $10 million to fund graduate fellowships and undergraduate internships at the Sanford School of Public Policy. In 2014, Rubenstein donated $1.9 million to Jewish Life at Duke to expand programming, fund building renovations and enhance the college experience for Jewish students. In 2015, Rubenstein gave $25 million towards the construction of a new 71,000-square foot Arts Center. In 2017, he donated $20 million to endow scholarships for first-generation, low-income students.

Rubenstein was elected to the board of trustees of the University of Chicago on May 31, 2007. In 2010, 2013, 2016, and 2019, he provided a total of $46 million to the Law School for scholarships. The gifts will fund up to 60 full-tuition scholarships for three consecutive Law School graduating classes. Approximately 10 percent of all students from the Classes of 2017, 2018, and 2019 will be Rubenstein Scholars. In 2014, he provided the lead funding for a Forum to serve as the University’s principal conference center.

Rubenstein has donated $60 million to the Harvard Kennedy School to facilitate its fellowship program and to help build its new campus. He chairs the Harvard Global Advisory Council. Rubenstein is a Fellow of the Harvard Corporation, the governing body of Harvard University.

Rubenstein has donated $20 million to Johns Hopkins Medicine and serves on its board.

Rubenstein has donated $10 million to PBS to help fund Ken Burns documentaries, and $5 million to the PBS affiliate in Washington, WETA, to help fund a new headquarters.

Earlier this year, David Rubenstein announced a $15 million donation to the U.S. Holocaust Memorial Museum to support and expand the growth of its collection. The Gift aided in the museum exceeding its $1 billion fundraising goal a year early, and as a result the museum’s collection known as the National Institute for Holocaust Documentation, will be renamed in Rubenstein’s honor.

Photo: Mega-philanthropist David M. Rubenstein one of the earliest supporters of Lifestyles Magazine/Meaningful influence with the publication’s founder Gabriel Erem 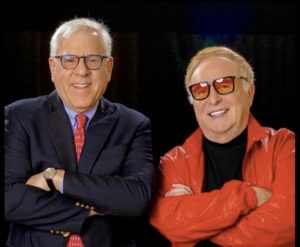