The Smithsonian receives a $200 million donation from Jeff Bezos, founder and executive chair of Amazon, and founder of aerospace and space flight company Blue Origin. The donation is the largest gift to the Smithsonian since the Institution’s founding gift from James Smithson in 1846. A $70 million portion of the donation will support the renovation of the National Air and Space Museum and $130 million will launch a new education center at the museum.

The Smithsonian’s National Air and Space Museum (NASM) in Washington, DC has revealed five design proposals for the $130m Bezos Learning Center, a project that will be realized as part of a $200m gift .

The museum is seeking public feedback on the aesthetic concept of the centre before announcing the winning firm in the coming months.  The final design is slated to be submitted for approval in 2023, with the building projected to be unveiled in 2026, coinciding with the 50th anniversary of the NASM.

The former site of a demolished glass-walled restaurant designed by the late architect Gyo Obata and his firm Hellmuth, Obata & Kassabaum (now known as HOK) in 1988 will be used for the new educational center. The complex will span three floors and 50,000 sq. ft, including exhibition spaces, a restaurant, a rooftop terrace and an observatory.

Some of the proposals include a honeycomb-inspired structure with elements influenced by the International Space Station and James Webb Telescope; a bulbous dome reminiscent of rocket ships; and a design influenced by the spiraling patterns of the Milky Way.

The donation from Bezos, who founded the aerospace company Blue Origin in 2000, also includes $70m earmarked to help fund the ongoing refurbishment of the NASM, which holds the world’s largest collection of aviation and space artefacts.

“The Smithsonian plays a vital role in igniting the imaginations of our future builders and dreamers,” Bezos said in a previous statement regarding the project. “Every child is born with great potential, and it’s inspiration that unlocks that potential. My love affair with science, invention and space did that for me, and I hope this gift does that for others.”

The education center will be housed in a new facility to be constructed on the east side of the museum’s plaza at its flagship location on the National Mall. It will feature programs and activities that inspire students to pursue innovation and explore careers in STEAM (science, technology, engineering, arts and mathematics) fields, and it will help teachers better utilize the Smithsonian’s collections. The center will connect to all Smithsonian museums, coordinating STEAM-related collections and experts across the Institution and promoting inquiry-based learning in visitors of all ages, with a focus on under-resourced communities. The center will activate programming through innovative community partnerships to reach students and teachers in Washington, D.C., and in communities across the country. It will be built in conjunction with the second half of the museum’s ongoing revitalization. The new center will be named the Bezos Learning Center in honor of Bezos’ donation.

The gift will also help enable a technological transformation of the museum’s galleries and public spaces, including the creation of new interactive experiences to inspire visitors, students, teachers and families.

“Since its inception, the Smithsonian has benefited from both federal funding and the generosity of visionary donors,” said Smithsonian Secretary Lonnie Bunch. “Almost 175 years ago, Mr. Smithson’s inaugural gift laid the groundwork for this innovative approach, bringing together private philanthropy and public funding. Today, as we emerge from a pivotal moment in history, Jeff’s donation builds on that original tradition and will help us reimagine and transform the Smithsonian. This historic gift will help the Smithsonian achieve its goal of reaching every classroom in America by creating a world-class learning center with access and inspiration at its heart. We are grateful to Jeff for his generosity and for his passion and commitment to education, innovation and technology. This donation will fuel our nation’s future leaders and innovators.”

In accepting Bezos’ gift, Smithsonian Board of Regents Chair Steve Case, the chairman and CEO of Revolution and founder of America Online, said, “Jeff’s early curiosity about space exploration helped inspire him to think big and act boldly, and as a result he has played a defining role in the expansion of the internet. We’re delighted that Jeff is making this commitment to help us extend the Smithsonian’s reach and impact, as we seek to inspire the next generation of scientists, astronauts, engineers, educators and entrepreneurs.”

“At this moment, the first human to set foot on Mars might be in elementary school,” said Ellen Stofan, the Smithsonian’s Under Secretary for Science and Research and former director of the National Air and Space Museum. “As the largest and most visited aerospace museum in the world, the museum wants to spark that passion and enrich the imagination and ingenuity of every student who visits the Smithsonian. For many years, Jeff has been an avid supporter of the Smithsonian and the museum’s mission to ‘ignite tomorrow.’ With this gift, we will be able to continue our transformation and further expand the National Air and Space Museum’s ability to reveal the possibilities of space exploration.”

“The Smithsonian plays a vital role in igniting the imaginations of our future builders and dreamers,” Bezos said. “Every child is born with great potential, and it’s inspiration that unlocks that potential. My love affair with science, invention and space did that for me, and I hope this gift does that for others.”

Since its founding in 1846, the Smithsonian Institution has been committed to inspiring generations through knowledge and discovery. It is the world’s largest museum, education and research complex, consisting of 19 museums, the National Zoological Park, education centers, research facilities, cultural centers and libraries. Two new museums—the National Museum of the American Latino and the Smithsonian American Women’s History Museum—are in development. There are more than 6,300 Smithsonian employees and 6,900 volunteers. The total number of objects, works of art and specimens at the Smithsonian is estimated at nearly 155 million, of which nearly 146 million are scientific specimens at the National Museum of Natural History.

Photos: Two of the five anonymous architectural proposals under consideration 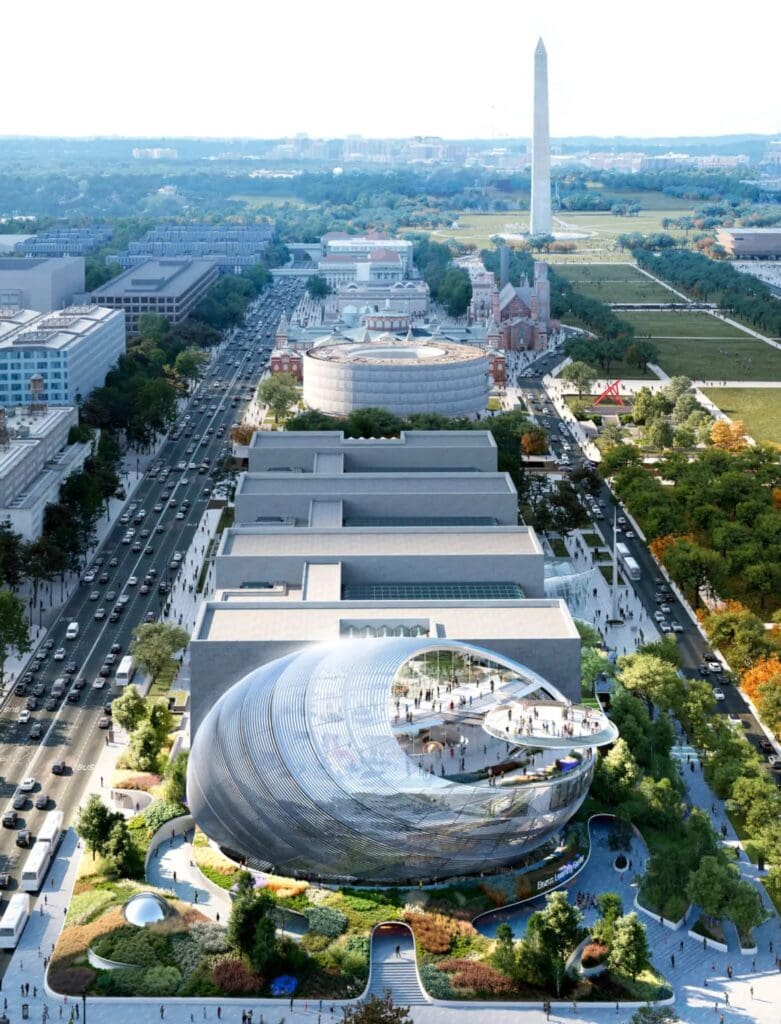 $420 million new commitment from Mike Bloomberg to reduce tobacco use

$35 million from Gates for Agricultural Innovations