As Lifestyles Magazine/Meaningful influence celebrates its 50th anniversary we would like to recognize and salute one of our earliest supporters, the world renown designer and Humanitarian Adam D. Tihany who was featured on the cover of our Spring Edition 29 years ago in 1993.

Adam created the original design of our Meaningful Influence Award.

The first awards were presented on our Magazine’s 40th anniversary for philanthropy to the Buffett family, for the Environment to the Cousteau family, and for the Arts, the Picasso family and for humanitarian work to Isadore Sharp, founder of the Four Seasons Hotels and Resorts.

The Award presenters were Microsoft pioneer Dr. Charles Simonyi, (of the Charles and Lisa Simonyi Fund for Arts and Sciences – a $100 million charitable foundation with the goal of providing “access to excellence.” It provides grants to worthy arts, science, and education organizations in the Seattle region and around the world.)

We were pleased to learn that AHEAD, the prestigious Awards for Hospitality Experience and Design, has most recently recognized Adam Tihany with the Outstanding Contribution award at AHEAD Americas 2022 held in New York City.

AHEAD is the leading Awards for Hospitality Experience and Design, comprising four regional annual awards programs concluding in a global finale.

The series celebrates the achievements of those shaping the hospitality industry across Asia, the Americas, MEA and Europe, before the regional winners go head-to-head at AHEAD Global to establish an ultimate winner in each category.

The criteria for success is based not only on creative excellence but on commercial viability, while pushing the boundaries of guest experience.

Tihany’s studio’s relationship with AHEAD is long standing, having scooped the coveted Hotel of the Year at AHEAD MEA 2017 for the Four Seasons DIFC, and being shortlisted in the Transport category at AHEAD Americas two years later for Seaborne Ovation cruise ship.

This year, Tihany’s extraordinary design work on the Mandarin Oriental Bosphorus in Istanbul is also shortlisted at AHEAD Europe.

Born in Transylvania, Adam Tihany spent his childhood in Jerusalem and later studied architecture at the Politecnico di Milano in Italy.

He took his first opportunity to move to America, and in 1978, he established his own multidisciplinary New York design firm.

In 1981 he designed La Coupole in New York City.

Restaurant design allowed him the opportunity to design everything from the interiors and furniture to the Bernardaud tabletop and uniforms.

Adam’s early years working in the foodservice industry prompted him to become co-owner of Remi restaurants in 1987, together with partner and executive chef Francesco Antonucci.

Tihany has built his career around the art of hospitality. In the restaurant industry, he collaborated with acclaimed culinary stars such as Thomas Keller, Daniel Boulud, Jean-Georges Vongerichten, Charlie Palmer, Heston Blumenthal, Paul Bocuse, and Pierre Gagnaire.

He has created several restaurants for Chef Thomas Keller, including the Per Se and Bouchon restaurants, as well as recently opened The Grill on Seabourn Quest.

He worked extensively with the Maccioni family, collaborating on eight projects including Le Cirque 2000, Osteria del Circo and the contemporary Italian restaurant, Sirio.

Chef Daniel Boulud and the designer have created three restaurants together, including Boulud’s flagship, Daniel, in New York City.

In 2004, Tihany designed the decor for a pool-side restaurant in San José del Cabo, Mexico.

His hotel work can be found in some of the most iconic properties in the world, including One & Only Cape Town resort in South Africa, Waldorf Astoria Las Vegas, Westin Chosun in Seoul, The Joule in Dallas, The King David Hotel in Jerusalem, The Beverly Hills Hotel, The Breakers in Palm Beach, The Broadmoor in Colorado Springs, and the Four Seasons Dubai DIFC.

Tihany brought his design concepts to the next generation of Holland America and Seabourn vessels. He served as Creative Director for the new Costa Cruises, overseeing a team of acclaimed design firms in the development of Italy’s finest.

He has successfully licensed product lines for several companies: Pace Collection and McGuire; Villeroy & Boch and Schönwald china, hardware for Valli & Valli; lighting for Lucifer and Baldinger and linens for Frette.

His long standing association with Christofle Silver of France has resulted in Collection 3000, Urban flatware, and K + T Hollowware co-designed with Thomas Keller.

Adam actively collaborated with Poltrona Frau in the creation of The Stanley Chair, which debuted in the company’s new home theater collection.

In 1998, Tihany designed a martini glass as a prop for an advertisement and the item became so wildly popular that the glass was selling on a limited basis, for $550 apiece.

Tihany’s massive contribution to design excellence has been recognized with honors and awards including an Honorary Doctorate from the New York School of Interior Design and induction into the Interior Design Hall of Fame in 1991.

He was recognized by Who’s Who in Food and Beverage in the United States by The James Beard Foundation in 1997, named Bon Appetit’s Designer of the Year in 2001, and awarded the prestigious Lawrence Israel Prize from the Fashion Institute of Technology in 2005.

Adam was appointed Art Director of The Culinary Institute of America in 2011 and currently serves on Pratt Institute’s Board of Trustees.

In addition to his interior design work, Tihany also develops a range of lifestyle products for the likes of Poltrona Frau, Giorgetti, Unopiu, Kartell, Bernardaud, Christofle and Roda, under the banner of Tihany Product Design. 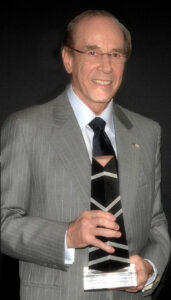