Mississauga will become home to one of the largest hospitals in Canada in 2025, thanks, in part, to a historic multimillion-dollar charitable gift from mega-philanthropist Peter Gilgan who was recently featured in an exclusive cover story in Lifestyles Magazine/Meaningful Influence.

The latest $105 million donation from the Peter Gilgan Foundation — one of the largest charitable gifts to a hospital in Canadian history — will allow Trillium Health Partners to improve two of its three sites, Mississauga Hospital and Queensway Health Centre, with the former set to be demolished and rebuilt and the latter having a new facility added to its grounds. These developments are also part of a 10-year, $30.2 billion investment in Ontario hospitals by the provincial government.

The new Mississauga Hospital, which begins construction in 2025, will be almost triple the size of its predecessor and will have the most beds of any single hospital building in the country.

Karli Farrow, president and CEO of Trillium Health Partners, said she and her colleagues at the hospital felt “elated, thrilled and like the future is ours and very bright” when they heard the Peter Gilgan Foundation’s donation. 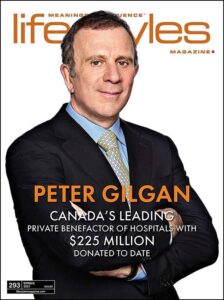